VietNamNet Bridge - The Vietnam Food Association (VFA) has warned that it would be difficult to export rice in 2017. 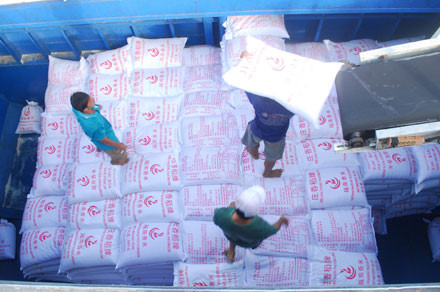 The inventory volume has reached nearly 1 million tons. Not only Vietnam, but Thailand also has millions of tons of rice in excess. The latter plans to sell eight million tons in stockpile. This means that Vietnam would have to compete with Thailand to sell rice.

Nguyen Van Don, director of Viet Hung Company in Tien Giang said it is even more difficult to export rice in 2017 than the last year. The company still had not signed any export contract by the end of March. It now just gathers strength to deliver rice under contracts signed in 2016.

“The market is unpredictable. However, it would be very difficult to find buyers this year. While the supply is profuse, Vietnam’s loyal markets such as the Philippines and Indonesia now can feed themselves, while other markets have tightened control over the import quality,” he said.

Le Thanh Khiem, deputy director of the Tien Giang Food Company, said there are latent difficulties in 2017 and upcoming years because of oversupply, while the market will be the buyers’ market. Meanwhile, an analyst said China would continue controlling the Vietnamese rice market this year.  This means that any fluctuations of the Chinese market would affect the home market. Vietnam has been warned it would face even bigger difficulties as the Chinese market is no longer easy to please. The bad news has come that the President of the Philippines has announced the country has halted the import of rice to protect local production.  VFA’s chair Huynh The Nang said not only the Philippines, but other SE Asian markets have gradually changed the rice import mechanism. It is not the governments, but private businesses which will come forward and import rice. Growing rice not a solution for Vietnam “Why does Vietnam still want to grow rice, if rice can't  sell well and the profit from rice is not high?” asked Vo Tong Xuan, an expert in agriculture. He believes that it would be better to reduce the cultivation of rice and shift to grow other crops which bring more money. Mentioning the 1 million tons in stockpile, Xuan said it is necessary to reconsider rice production scale in 2017. Vu Van Liet from the Vietnam Agriculture Academy said the state needs to help enterprises boost exports to African countries to clear the stocks, because the countries have the same requirements for rice quality as China.

From July 1, 2011, Company has operated with the new name: Intimex Group Joint Stock Company (Intimex Group) with the development orientation of “multi-sector, multi-profession, and multi-nation”